Hallasan is one of Korea's three most sacred mountains, located on the southernmost island of the Korean Peninsula. It rises 1,950m above sea level, making it the tallest mountain in South Korea. Due to its diverse vegetation it has special scientific importance as a treasure house of plants, and was therefore designated as a natural monument (No. 182) on October 12th, 1966, and officially named the Hallasan Natural Conservation Area.The ever-changing colors of the scenery evoke a sense of wonder in all those who seek the beauty of nature, and this is why the area was designated a national park on March 24th 1970, and a UNESCO 'Biosphere Reserve' in December 2002. This unique area was internationally recognized on June 27th, 2007 when 'Jeju Volcanic Island and Lava Tubes' were designated Korea's first UNESCO World Natural Heritage Site.

The Shuttle service to Mt.Halla

Seongpanak, Eorimok and Yeongshil :
it is convenient to take a public bus at JEJU Bus Terminal near YEHA Guesthouse.
Gwaneumsa :
Most tourists take a taxi to go to Ganeumsa(관음사) hiking trail due to the lack of public transportation system.
(The transit time of about 30 mins to arrive at Ganeumsa(관음사), the taxi fare ; approx. 15.000krw) 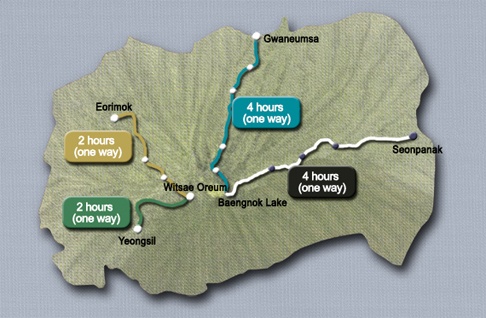 By taxi:
Guesthouse → Gwaneumsa Campsite : 15,000KRW
By bus:
No Service